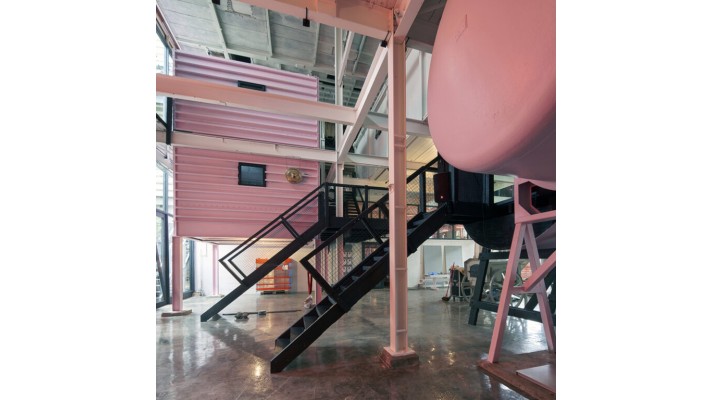 On the site of the former cattle feed plant De Heus in Den Bosch, a temporary place is being created for the city. The Social Label DesignLab is one of the parties that have been chosen to place the site firmly on the map and to enrich the city during the coming ten years. Social Label is a foundation that aims to use the possibilities offered by design to help people on the sidelines of the labour market into employment. Part of the building will be used by Social Label as showroom, workshop and office space. The restaurant Van Aken, a component of the foundation, has also made a flying start there. The pink-sprayed room is used for parties, dance nights and all kinds of other cultural activities.

We were asked to come up with a plan to utilize the rest of the building. This should include workshops for the Social Label Designlab itself, but other rooms will be rented out to other creative companies and initiatives.

The plans should not be too complicated or costly, as the investment is temporaley and only for ten years. This is rather challenging, but in a way also makes it more simple: almost everything is too expensive, so how can we make an essential addition that is really useful and adds value? We decided to focus on taking things away instead of adding them. Thing that need to be add, should be extremely simple.

The local council had made the building ready for use, which primarily meant making it wind and watertight and (fire) safe. The municipality’s construction method, securing everything with beams and sheet material, forms the basis for the additions we will make. The sheet material will be largely removed and replaced by glass, and the new facades will be constructed in a similar way. Furthermore we will remove a lot of steel from the building (which also yields something) and take out flooring sections in order to create space, light and openness. We will use the massive wooden floor sections to make the new walkways, stairways and handrails. Exept glass, no new materials are added to the building.

A number of existing steel towers, former industrial boilers, vessels and silos, will be maintained and transformed into workspaces. The large building will remain unheated but the smaller workspaces can be individually heated. As such, the big open space will become a kind of ‘inside-outside space’. The first plans looked simple on paper but were radical in practical terms. After further examination it was discovered that the existing stairways can just as well, or perhaps even better, stay where they are.

The plan is very simple because the building is so large. As so many different kinds of users will take up residence it is essential that visitors and users should immediately be able to see how the building unfolds. Instead of a slow, organic growth with smaller tenants gradually using more and more of the building, as is so often the case with this kind of property, we have decided to make one significant change after which the same process can take place but then from one central space and concept, without putting obstacles in the way.

In order to create the central space we will remove two existing brickwork facades that face each other and replace these with wooden beam glass walls with large beam entrance doors. The wooden floor sections of the levels in between will be removed from top to bottom. When we are finished, there will be a large space in which everyone can come into contact with each other and where small businesses and activities can find and create their own space – a social work centre.