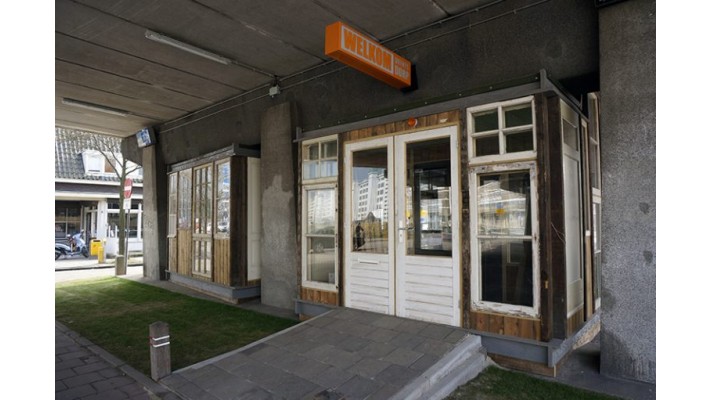 Community centre made from old windows and doors

A housing association wanted to make a temporary community centre near us, under a viaduct. They came up with the idea to make the building from old windows and doors. They originally intended to build it themselves, but the limited budget and the quest for old materials led them to ask us to do the design and realisation. I thought it was strange they didn’t approach us in the first place, for a construction like this, since we are, after all, experts in this field, and situated just two hundred metres away. It didn’t take me long to come up with a construction principle with which we could place the old windows and doors directly between vertical beams, which would make the upright both prop and window frame in one go: a principle in which the size of the windows defines not only the look but also the position of the uprights. A primitive sort of double glazing was made by placing two windows in front of each other. It seemed simple and easily achievable, and it was too, in practice, but the details took much more time and attention than we’d thought. As so often is the case, there was some mention of recklessness in retrospect. However, given that the floor and the roof framework were also made of beams, we did use up a substantial amount of our beams.