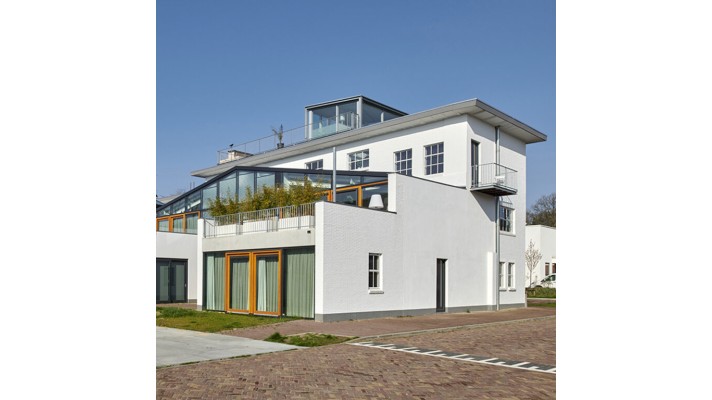 After brutally demolishing the back side of the RF building, around one-third of which was levelled completely to the ground, a desolate sight with a disembowelled façade remained. But, on closer look, this sight was actually a feast for the eyes. The beauty of the industrial building, the riveted and bolted Polonceau trusses, the concrete coffers, the ceiling lights, the cross-cut partitioning walls and the way in which the slanted roofs meet the straight frontal extension – everything is visible and comprehensible.  It is like a puppet theatre for industrial architecture and, if you were to put a window in front with actors behind it, it would be like a peep-show of working and living. The concept for the reallocation of the building was handed on a silver platter by this very same building: a glass facade that remains disconnected from the existing building, while at the same time offering a glimpse into it.

With a lot of bravado, fuelled by the way in which we have developed the RAG building, I have arranged that we will be able to develop the rest of the RF building. I already had the plan: instead of one very large component, as was previously the idea, I figured that it can be split up into a maximum of four houses. But it can still be purchased as a whole, or as a house comprising two or three components. Strangely enough, the possibility of creating these extra houses arose from sacrificing a section of the space, which allows more light, air and outside into and around the houses. Even more important is that it is not at all difficult to imagine how great it will be to live and/or work here. By staggering the facades even more, all the houses have more privacy and more light and the façade of the whole RF building is different for each component. Going up and down and back and forth, the façade of the whole building along the green zone is a feast for the eye and to live in.
Without the existing building it would never have been possible to develop such a façade and way of living, although you would love to have come up with the idea. Incidentally, it would then have been priceless as it is exactly those old industrial construction methods that have now become priceless, and a gift for us.

A maximum of four apartments could be realised in building part 1 and it has eventually become three: one has been sold as a double. So the architecture is tailored to suit the future residents instead of a defined building in which the occupants must fit in with the available possibilities.

Building part 3 is the final part to be redeveloped. Here we have also created a design whereby the existing elements form the starting point. The existing staircase is really beautiful and will be kept. The existing technical spaces will be used as outside storage or technical space. Due to the existing design of the building, it goes without saying that a large maisonette will be realised in the left-hand corner of the RF building. Two apartments will be realised bordering the staircase: one on the ground floor and one on the first floor. The second floor is a former office space and will in the future become the penthouse of RF building, complete with roof terrace and also accessible via the authentic staircase. The apartments and the maisonette profit from the new glass façade to the south with adjacent roof terrace. So each residence in this part is also light and airy. In addition there is a communal inner courtyard for the residents, which connects to the ‘schakel park’.