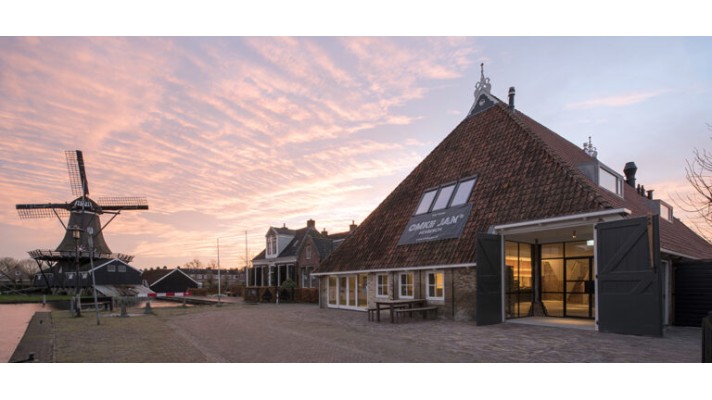 In June 2014 we were asked to devise a plan for the renovation of a historic farmhouse (1904) in the Friesian town of Woudsend. The client wanted to turn it into a vibrant meeting place, in which the handicrafts and food from the surrounding area play a central role. The milk and meat come from the Friesian cow, the flour from the mill in the village, the wood from the adjacent mill and you can catch your own eel and smoke it in the smokehouse down the road.

In keeping with this wish for authenticity we wanted to emphasise the original qualities of the farm as much as possible. Showing off the majestic roof construction in its full glory formed the starting point for the design. We were faced with the choice of searching for contrast between old and new (modern) or to match the existing building.

An ugly mezzanine floor had been added during an earlier renovation, in the space where the cows used to stand, that was used to store hay. This had to be removed because the floor obstructed the view of the beautiful roof construction. We eventually decided to keep the later added steel construction, but to create an enormous atrium in it and finish it with clean lines so that the roof construction would stand out from the white plasterwork and be clearly visible from practically every spot on the ground floor. Instead of throwing away the ugly, we have put it to good use.

The ugly steel construction gave rise to the design, but even without it this design would have come to the surface as the most logical and best choice – a sleek shape with an atrium in which the historic roof construction is visible. The remaining choices all stemmed from this one decision.

The most striking detail in that regard is the light shaft (almost a room) that allows daylight to shine straight through the storey onto the central table. It looks just like an architectural phenomenon from the past. Yet the proportions of the guest rooms, the wall of yellow stones, material choices for facades and walls, the location and size of the kitchen and other rooms also all stemmed from the sleek ceiling with atrium and the desire to emphasize the historic qualities of the barn.

As we matched the materials and colours of the stables in a sober and authentic way to fit with the nature of the building, so we chose striking colours for the original house. Just as they used to be, house and barn are now separate worlds that compliment each other.

Become our accessory dealer!
Ask your question or request a quote
Get inquiry