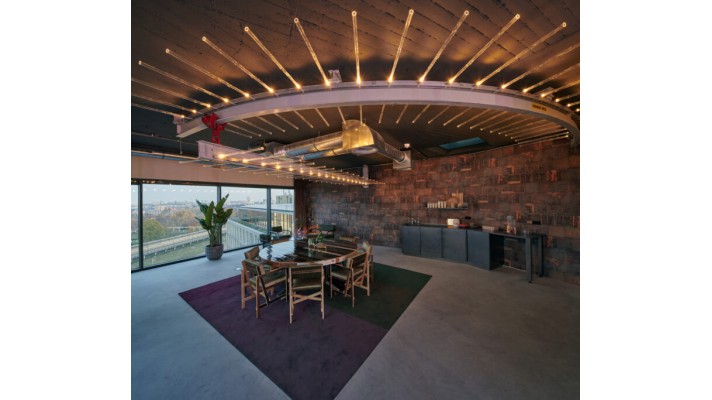 We organised several diners in the workshop with Sergio Herman for the first time during the Dutch Design Week in 2018. These were, just like the last edition, unforgettable. But this piece is not about that. I worked with Jeroen for the first time during these diners. He is a kind of culinary-organiser, jack-of-all-trades and handy in every sense of the word. So handy, in fact, that he was the only one to make anything out of the diners. So it seems, in any case.

Jeroen put us in touch with Bob Goevaers, who was then, and still is, involved in the redevelopment of Strijp-T, the former Philips industrial site located next to Strijp-R. It is also the site of the old Philips glass laboratory. Jeroen asked whether we would like to come and take away all the stuff that would otherwise have been thrown away. We took away glass of all kinds, in all shapes and sizes, and right at the last minute we also decided to take the old glass-sawing machine. Bob was fine with it. He wouldn’t get that much for selling it anyway, and if we were happy with it and were willing to do something in return, it was OK (this is reasoned from my own perspective).

Once back at Strijp-R, we had a treasure on our hands that had yet to be mined. We started sawing, which initially turned out to be pretty complicated. The first sawing tests all went wrong and whatever did work took a really long time. Finally, Roos (my daughter and now our master glass-cutter) decided to call the phone number printed on the machine. And there actually turned out to be someone on the other end of the line! Not long after, he paid us a visit and gave us, alongside a lot of useful instructions, a blade that would allow us to use the machine to cut glass. We were able to saw glass!

We were then asked by Bob, via Jeroen, or however it went, to design the interior of the boardroom in the new Goevaers premises on Strijp-T. The light design is based on glass tubes from the glass laboratory that have been sawn to size and attached to the steel lifting beam construction.

All in all it is a product development miracle, because everything actually went exactly as planned and was right first time, while there are numerous reasons why it could have gone horribly wrong!