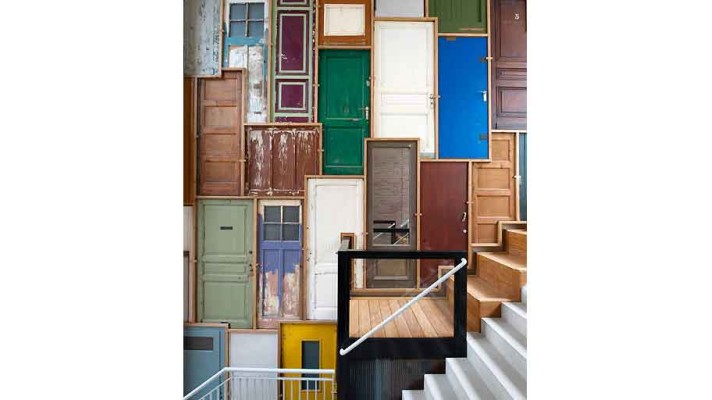 We’ve carried out a number of major projects for Peter Geusebroek (architect) and Alliantie (developer). For each of these projects, we produced the doors or entire vestibules for the buildings. This particular project was commissioned at a very early stage, while the old building scheduled for demolition to make room for the new one was still standing. We originally planned to remove old elements from the old building and use them in the new one. The plan was to photograph the facades of the old building both before and during the demolition work, and then to integrate these pictures into the new building and place the demolished pictures in these pictures in the exact same spot where they had been located. The idea behind this was to integrate the origin of the neighbourhood with the location and to place the building in a historic context. But the photographer suffered from burnout and, to make matters worse, lost all of his files. As an alternative, we started photographing comparable facades in the neighbourhood and then photoshopped the results, which did not turn out quite as good as expected. When it then turned out that the work of art was not sufficiently integrated into the building plans, we concluded that it was, after all, only a poor substitute for the original idea, and that we needed to shelve the old plan, which had already cost fistfuls of money, in order to hatch a new plan or end the entire project. Funny enough, we ultimately came up with an idea that was far better than the original one. We covered the enormous walls, on which the photo paste-ups and old building materials were to be placed, in their entirety with old doors (partly from the containers with materials that had been preserved). The result is far more convincing than the original idea and also fits in much better with past projects we have done.