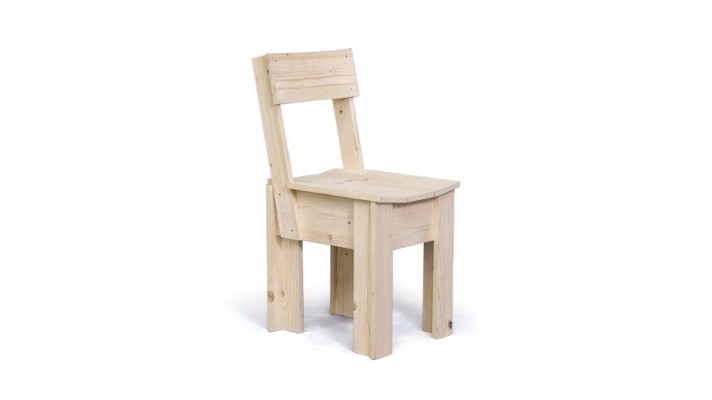 2019 ADJUSTET 2009 CRISIS CHAIR There is no longer a crisis, but we are still experiencing a slight one. Our company is anti-cyclical; quite nice really. And that finances have been difficult for a while is really due to the fact that producing our products in the Netherlands is pretty complicated and on top of that, a large order went really wrong a while ago. This has already been extensively discussed.

The crisis collection dates from the period when the Twin Towers were attacked by terrorists. An event that had an impact all over the world. In the United States, this act of aggression was seen as a confirmation of their idea of the world ‘we are the good guys and they’re the bad guys’. In Europe, we had to revise our worldview of trust and belief in human nature.

The changing sentiment led to a global economic crisis that was perhaps actually largely psychological. Particularly in Europe, the economic decline was not so bad. More than anything, people were complaining about how bad things were. I thought, if everything has to be cheap, I’ll make an inexpensive chair and table in a bag. The customer can then assemble them, very cheaply, themselves at home. We had just purchased a computer-controlled milling machine and with just one press of the button, the components could be cut from one sheet and put straight into the bag. However, it turned out that nobody was willing to assemble a chair themselves – things really weren’t that bad. Nevertheless, the collection was a success. The crisis collection has since been further expanded and is successful by our standards.

In 2009 it hit again, but this time it was a serious crisis. The banks were selling products they knew absolutely nothing about, and the central banks were groping around in the dark to discover the consequences and what to do about it all. We made a 2009 crisis series. Not on the milling machine, because CNC milling is expensive and milling costs more per centimetre than sawing, which is actually also much faster. The result was a straight chair made using the circular saw, cheaper than the original crisis chair and assembled (which we had to do anyway). A table and later even cabinets were also introduced.

Personally, I find it one of the better collections but after checking the sales figures, it seems I am one of the few. Such a difference in opinion is never much fun, so I’m trying again. The 2009 crisis series, updated in 2019, will be presented during DDW this year. Worst case scenario is that the reintroduction becomes a non-selling classic.

This wouldn’t be the first time. When we added curves to the oak chair in 1993, which initially had a straight seat and back, it suddenly started selling. Only real design enthusiasts are willing to live with a straight, hard seat and even they will opt for comfort if given the choice. After the adjustments, the scrap wood oak chair (as it is called) later turned out to be our best-selling chair. It is actually strange that we did not make a rounded back and seat right from the start. For the connoisseurs we are also making a limited edition of the 2009 crisis chairs.

We made prototypes in different types of wood: