Each year the Nederlands Zilvermuseum (Dutch Silver Musuem) in Schoonhoven offers artists and designers the opportunity to create an item in silver, via the Stichting Stokroos (Stokroos Foundation) grant. This year I had the chance to do this and for me the logic was: if you’re allowed to do something you don’t normally do, then it’s fun. This logic is only logical if your job or motivation is to create something new rather than mastering a skill and refining it, which applies to most jobs. Ultimately doing something for the first time becomes routine.

My design was not a product but a little machine, which you can use to produce a link, which can then be made into bracelets and necklaces. I had already been sitting on a design for a wide bracelet for a while, and this task was the perfect opportunity to do something with it. The design was duly received, but the assessment committee’s opinion was that they had not asked me to make a piece of jewellery. It had to be an item for everyday use; suitable for interiors. I have to admit that I was somewhat piqued, and actually I lost all enthusiasm for the project.

The deadline was quickly approaching and I ‘still’ had to produce a design. Which couldn’t be too complicated because it had to be made very quickly. I thought, still a little crossly, that if it didn’t really have to be beautiful but only suitable for interiors, perhaps I still had something to offer. The production method for the stamp vase which we once designed for Noord Brabant province, where the tension between the number of items made and the budget led to a very specific production process and design, would perhaps offer a solution for this project too. At the time, the number of items we wanted to produce was too great to make the vases one by one, but the budget was too small to pay for an expensive mould. Normally a deep drawing mould like this is rather expensive because you want to have a product that matches the design exactly, and because the product must be identical each time. But when you only make an inferior mould and accept that you won’t obtain identical products from it, this kind of mould is not at all expensive. And deep drawing can also be done using a simple garage press, so in terms of machines it all worked out well. At the time it was a nice story for the vases, the flowers also looked pretty in them, but the story was still more appealing than the product.

The dish for the Zilvermuseum (Silver Museum) would have a broader base which highlights the process even better and of course it’s much prettier in silver. We started with a number of different sheet sizes, mould shapes and diameters. The dishes were already a lot nicer than the vases, but the story was still better than the product. Then we had the idea of placing the sheet on the punching machine to perforate the edges. Not only did this turn out to be an essential addition, but the anticipation of placing a sheet of silver on this rough machine was also really great. We did some tests first in copper, because this material is the most similar to silver in terms of tensile strength.
Then came the key moment: we placed the sheet of solid silver on the punching machine, a few euros were stamped out of it with each blow, and if the stamp got stuck we would have a sheet of scrap silver (this would happen later on with the first brass dish). Next the perforated sheet was placed on the garage press and pushed into the mould. This could also have gone wrong, we already had examples of ugly crumpled up bases. But in the end it all worked out. The dish came out from under the machines like a gem. So it was still a piece of jewellery. 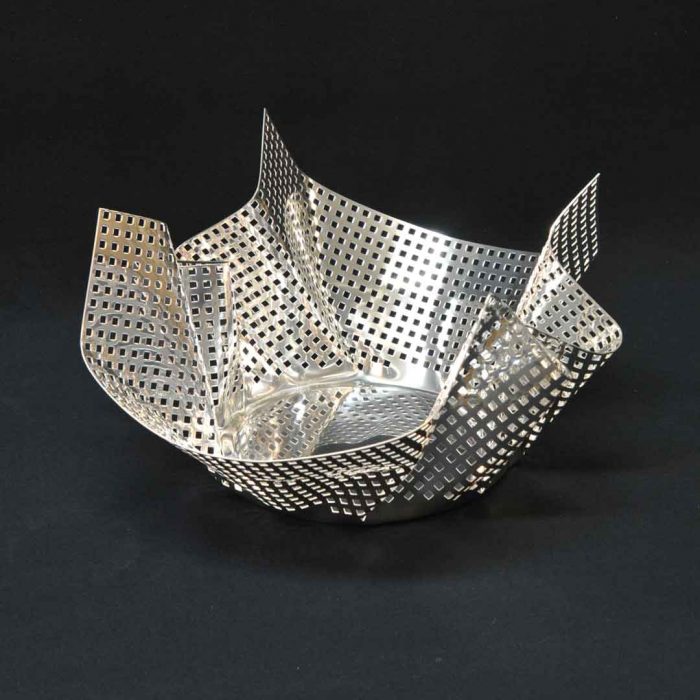 The silver dish is now on display at the Nederlands Zilvermuseum (Dutch Silver Museum). It will probably be a numbered and limited edition.

For mere mortals, we have now included an aluminium, and a copper and brass version in the collection. 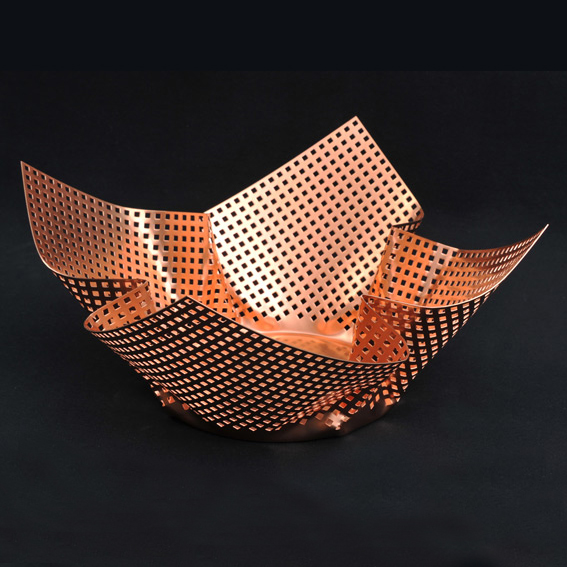 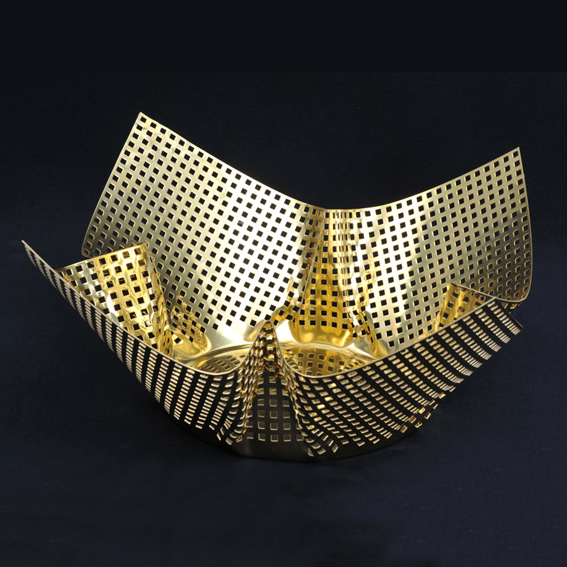 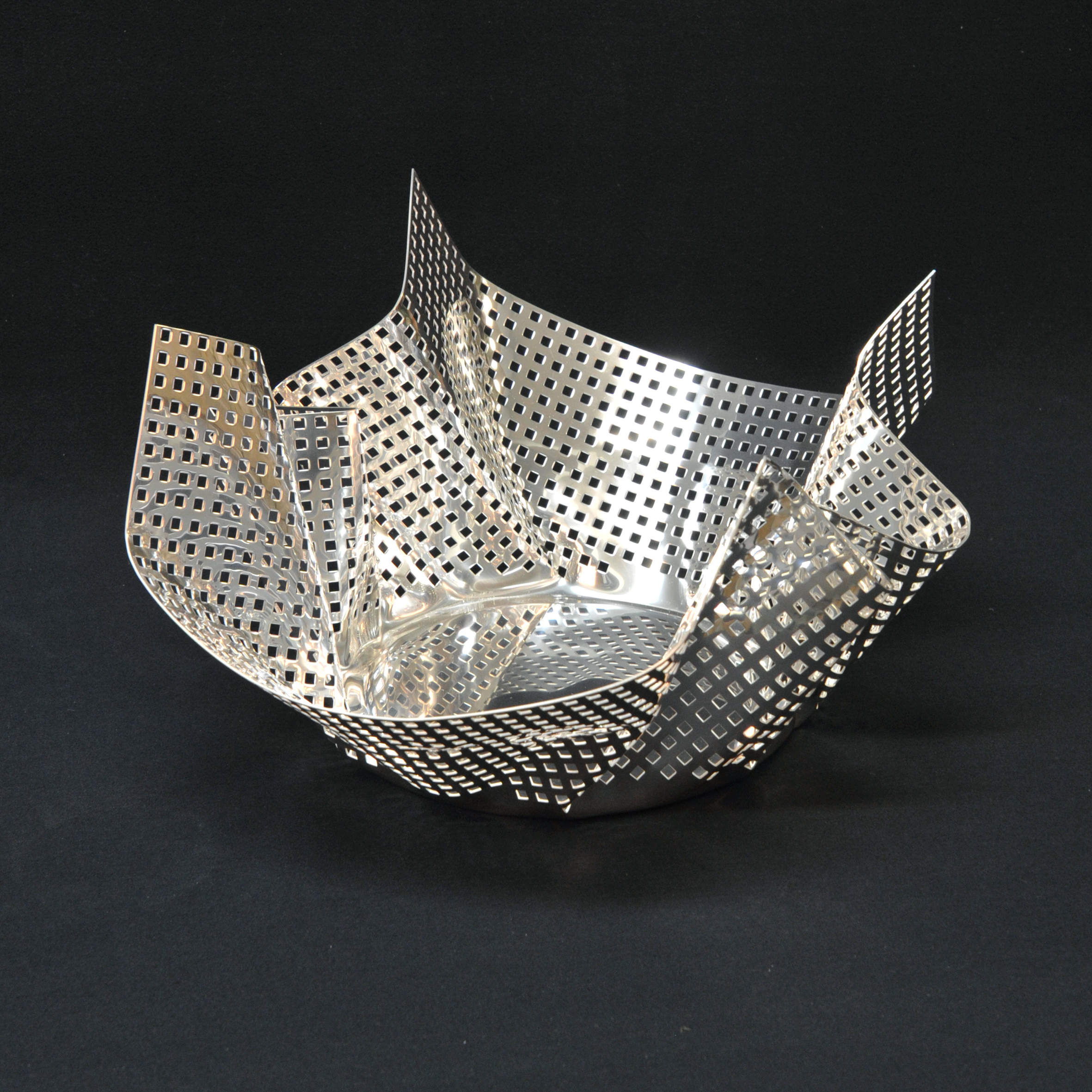