When the World Wildlife Fund asked me to go to the Amazon, I was immediately enthusiastic. The request was for something I find important, fun and interesting, and from an organisation that really appeals to me.

Of course, the World Wildlife Fund is not a travel agency. The idea was to look at projects through the eyes of conscious (well-known) Dutch people and to introduce them to people in a fun way. There I stood at Schiphol several weeks ago, a little on the side-lines, with 6 famous Dutch people and a whole film crew, being waved off by the tabloid press.

During the journey it quickly became apparent that the whole group was enormously motivated to make sure the trip was successful. There could be no better basis for enjoying each other’s company! While spending an evening discussing the differences and conflicts between “this is television man” and the interests of the World Wildlife Fund, everyone was continuously united. Incidentally, I have discovered that the moment I turn off the television at home, because they are trying to entertain me, I also become rebellious in front of the camera.

On the very first day I visited one of our projects together with Loretta Schrijver. An FSC sawmill and my project, George Dobré’s little factory. The meetings with George were very special and it turned out that he had similar ideas, problems, thoughts and ideals in many areas, even thousands of kilometres away. Our talk was great fun and really inspiring and it wasn’t long before the others couldn’t follow us any more. We tried to make the best of it in terms of television.

The highlight for me was a car he had crafted for his son from a tree stump, with the bark still attached, very simple – after all, his son had to know that wood coms from trees, right? My tree stump child’s chair originates from the same idea. I went back to him later with drawings and a load of ideas, and our meting was magical. We talked about all kinds of things and will definitely be working together in the future. Even without him knowing, we are already making designs and models. 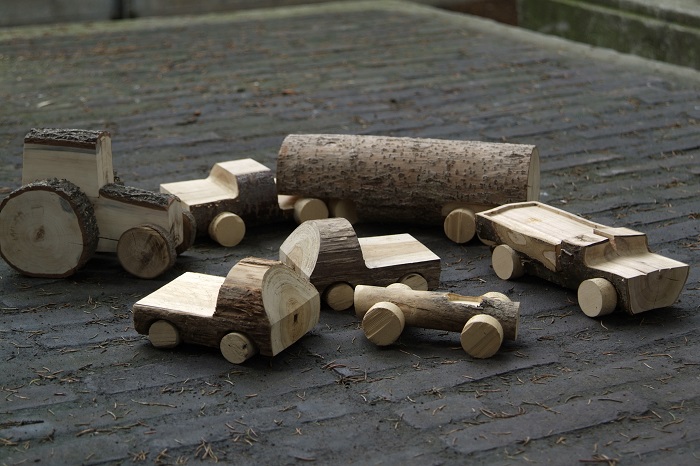 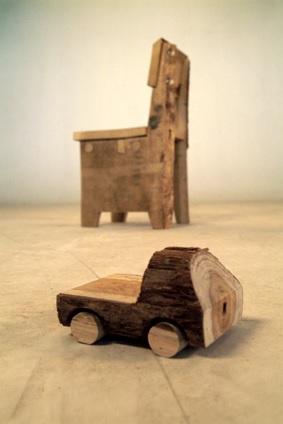 At George’s I also saw pieces of wood, completely sawn with a chain saw and therefore with a beautiful surface. Once you’ve seen this surface, you see it everywhere, using a chainsaw is apparently more obvious that sawing in a sawmill. The tree trunks, not very big, are sawn by the “communities” deep in the forest. As it is inaccessible for machines, they drag the wood out of the forest using oxen and the size is altered depending on the strength of the ox.

The following day we drove to our first jungle destination over an asphalt road with steppes to the left and right and every now and then little wooden houses, bars, churches. The buildings are all open, because it is always very warm. Beautiful surroundings with a true holiday feel. The landscape is full of enormous trees with tall trunks and high crowns. Slowly but surely we started noticing that many of the trees were dead or dying. The same landscape that was first so beautiful became lugubrious and ugly. The ‘Brazil nut’ trees are still standing because they are protected but without their natural surroundings they have been condemned to death. Hundreds of years old, tens of meters high, with enormous crowns, they stand there dying. The surrounding grassland is hardly used for grazing or agriculture. It is just a landscape of steppes as far as the eye can see and all, apparently, without purpose.

The jungle is important for everyone and as will become apparent later, loved by the local inhabitants. Yet it is seemingly worth very little if you have so much of it. The World Wildlife Fund projects give these people the chance to live from their surroundings instead of destroying them. Not by forcing them or patronising them, but by offering them a better alternative, in every way. The projects are essentially all very simple. People earn more through carrying out the same activities, through founding a cooperative for example, providing schooling, buying machines and computers or by establishing contacts. Using simple knowledge and resources and contacts, so normal for a large modern organisation, can create an enormous difference. It is like Goliath giving David a helping hand (or the other way round?). It seems like the people are rediscovering the chances and possibilities presented by the forest, and once again have the space to live the lives they really want to.