We are in exciting times again; the Dutch Design Week is just around the corner. It seemed that we were pretty well organised this year, but nothing is ready yet. We have just a few more hours in which to get a lot of things done. And the great thing about plans is that if you don’t realise them, the result is not visible, so nobody will know. The best way of illustrating this is that we will be launching BOOKS 2 and 3 on the first Saturday of the DDW. The books have been delivered only a few days ago. Well planned, you might think. But nothing could be further from the truth, because my first serious plan, after having worked on the books for a considerable time already, was to present them at the Salone in Milan in April 2017. It has taken us a year and a half longer than expected! Although this is not surprising as this date was really very optimistic and is proof of our complete underestimation of what it takes to make a compilation of eleven years’ worth of work. Anyway, our most important product this year is not a design, but two books about our products and projects and of course much more. In short: you can’t get more Eek for less!

In addition, we have also been working on several new products. What can be called a new development is that, instead of being copied, which is beginning to take the form of a popular hobby, I am the one doing the copying. We are going to use printed sheet material to make a so-called flap-over-the-wall-table, so that when the table is hanging on the wall, it looks like a piece of art. The other copy is a ‘camel chair’. Early this year I purchased two antique items in France and decided to copy them. The chairs are knock down and can be assembled in no time. The chairs were originally designed for ladies travelling with the camel caravans. The men sat on the ground 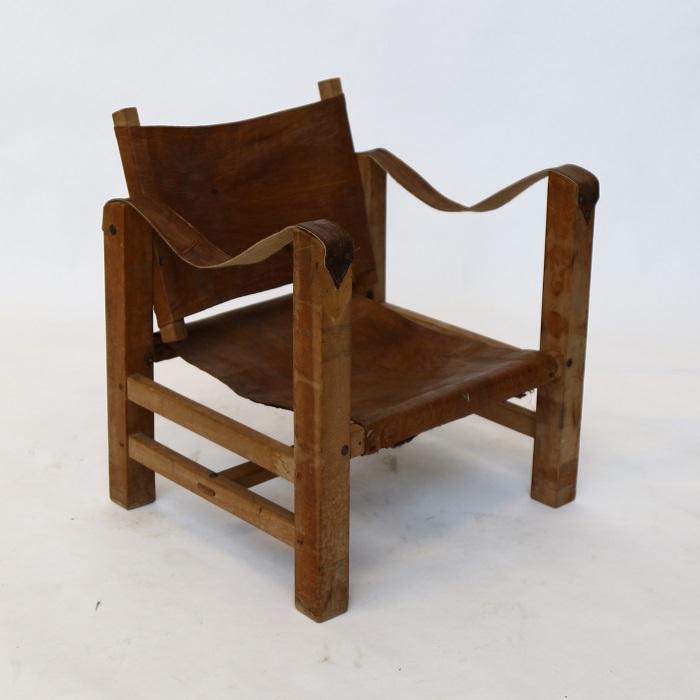 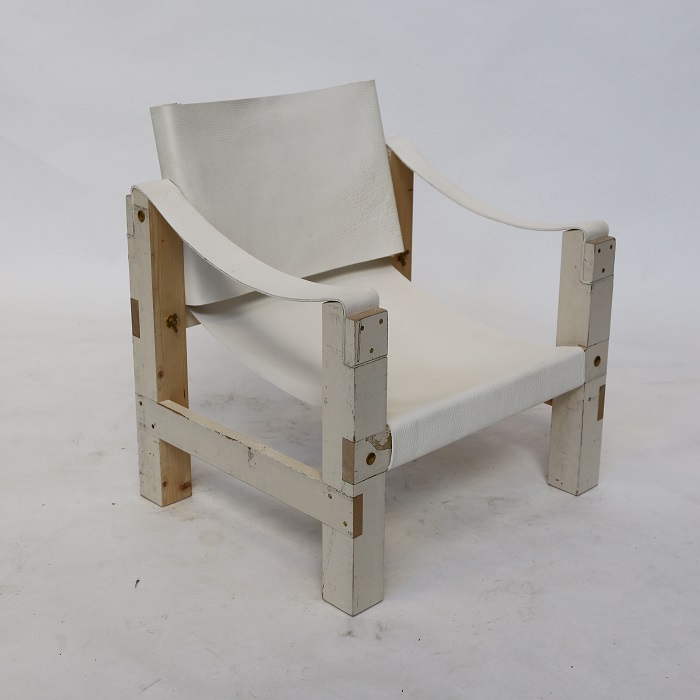 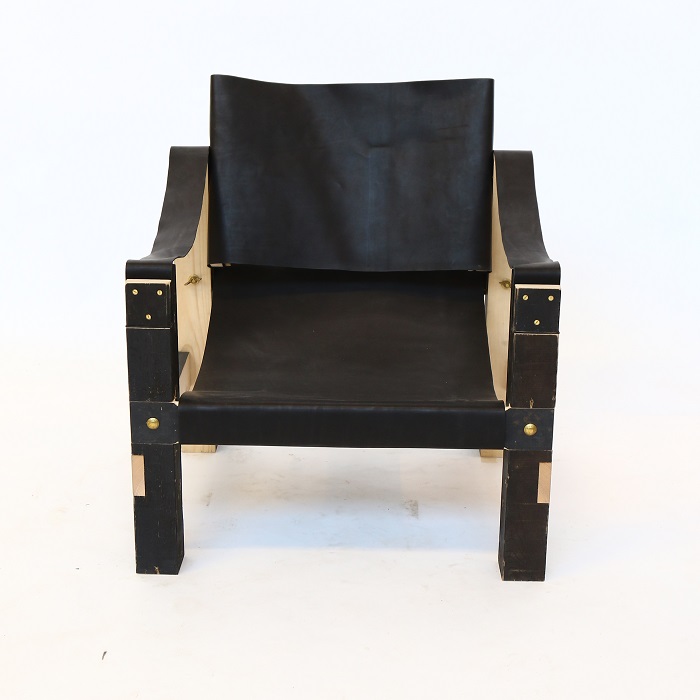 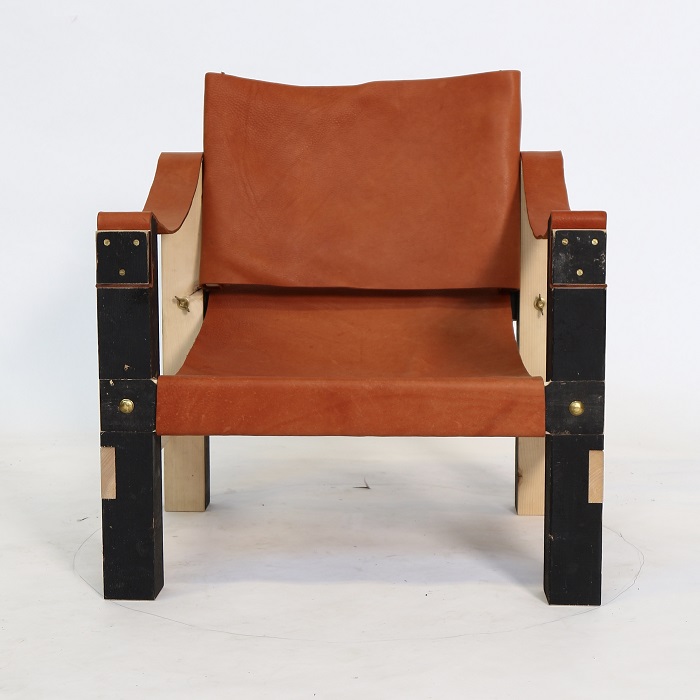 So I am not the first to copy these chairs. The design originates form the nineteenth century and, just like the flap-over-the-wall-table, it is nobody’s intellectual property. In the past, artisans made the same products over and over again, and they often became better and more beautiful. You could say that I am continuing a tradition. The prints we use for the little tables come from the Rijkmuseum image archives. As the artworks were painted so long ago, the images are all royalty free! 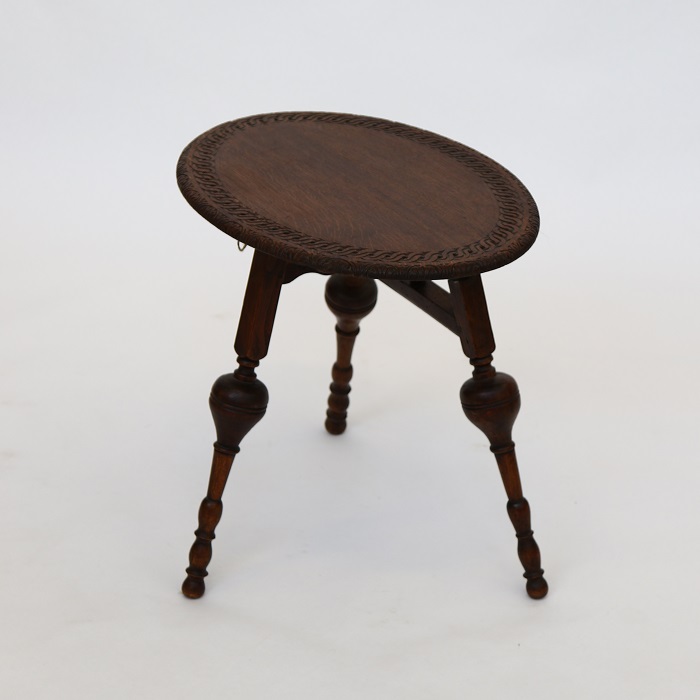 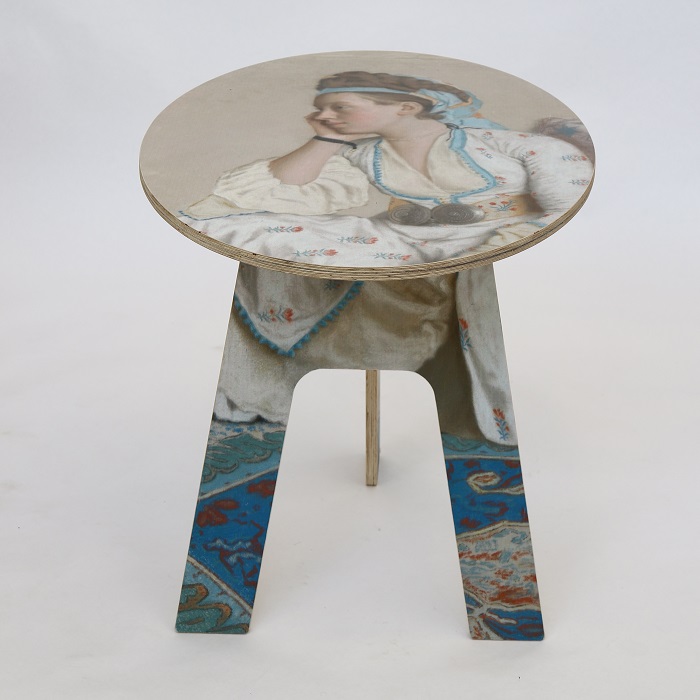 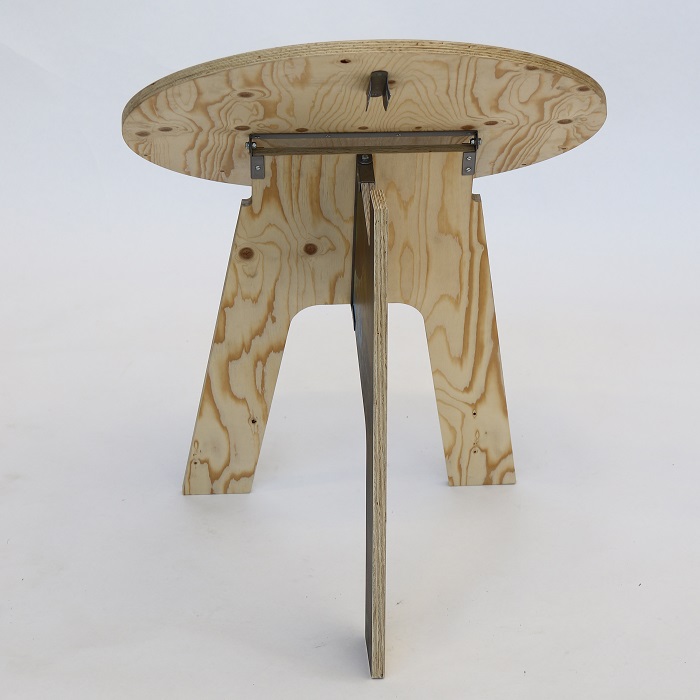 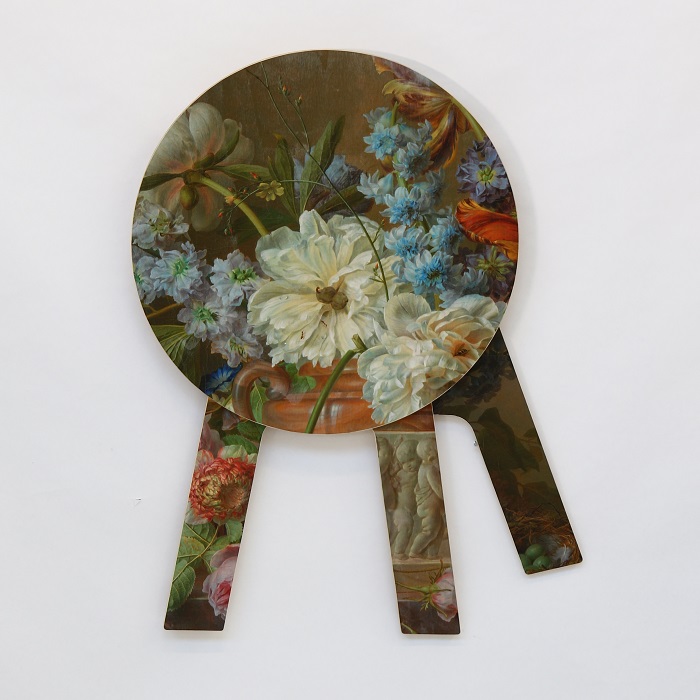 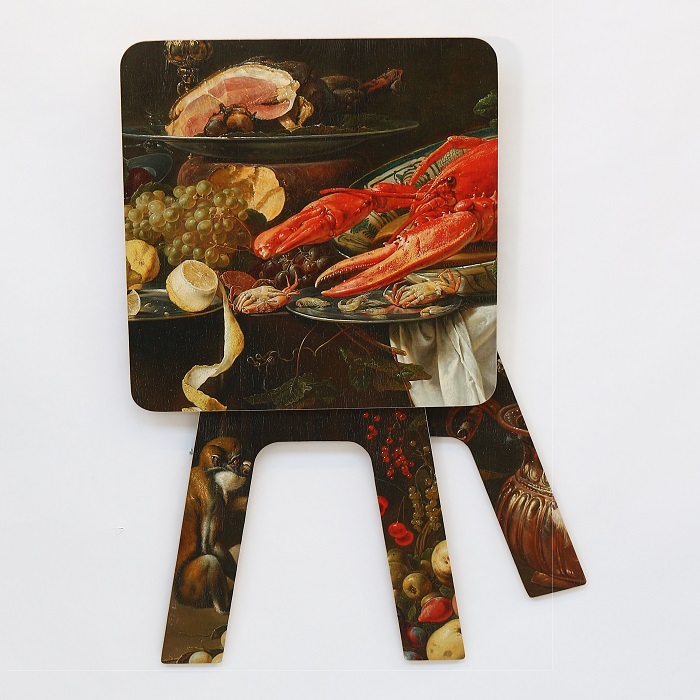 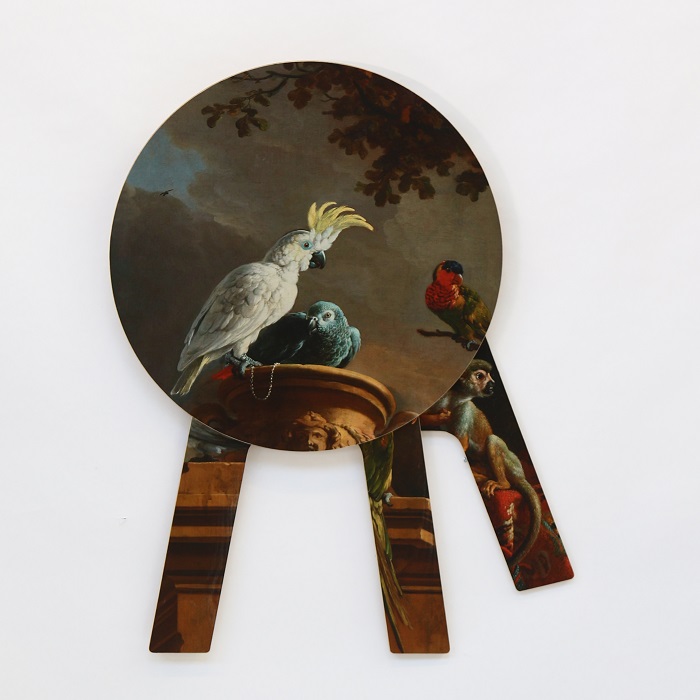 I always elaborate on what I have made before, and sometimes a new element is added to my shape and design vocabulary. As such, we made Tramkadetafels (Tram platform tables) this year. These are made from tubing, just like the RAG furniture. An important difference is that the Tram platform used square tubing. These tubes were used to house the Jacob’s Ladder trays with which animal feed was transported. The robust square tubes are even stronger than the round RAG tubing. The tables are reminiscent of the architecture they originate from. 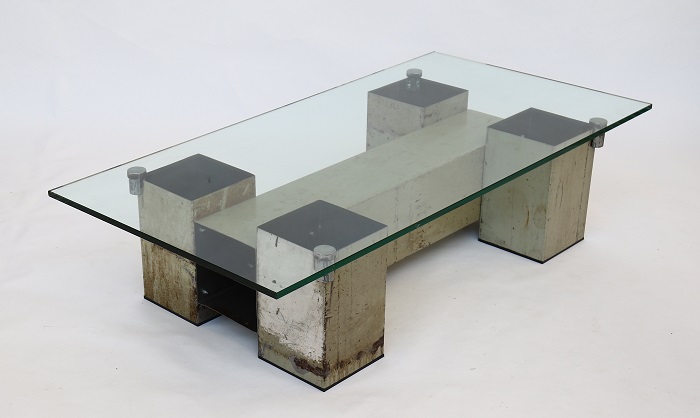 Another elaboration resulted with the elm tile cabinet. This time we used elm instead of scrap wood. The structure and colour variations of elm are, in this case, more beautiful than oak or beech. While sketching, it was almost impossible to put all the details to paper, so we made some test pieces just to be sure. As is characteristic of most of our special objects, the cabinet is precision work (this aspect is amply discussed in books 2 and 3). The material, detailing and attention we have paid to the little cabinet, which is certainly not big, has something of the period in which traditional crafts were still a part of life. But at the same time, it is also an object that has never before been made. 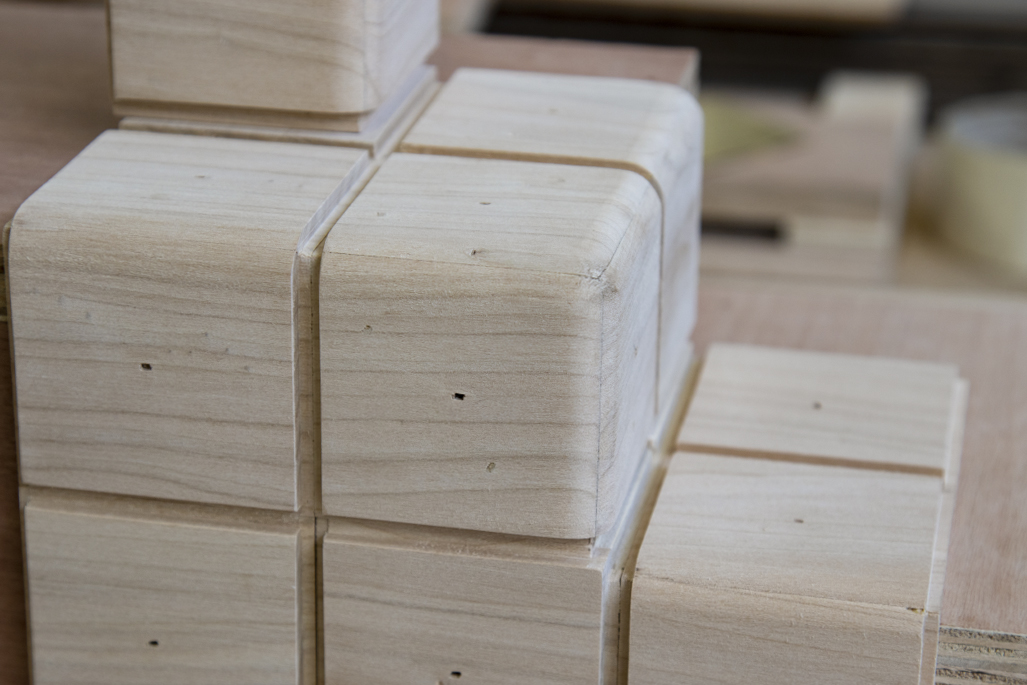 The inside out bench

The inside out bench we presented in April in Milan is really new. Now we have made another one, but we are going to show some variations on the inside out theme: a totem of square blocks and regular inside out blocks that you can use however you like. Turning a tree inside out is very efficient in terms of wood, and is a bit of fun for us, but not in terms of work. It costs a great deal of time and attention to turn a trunk inside out. 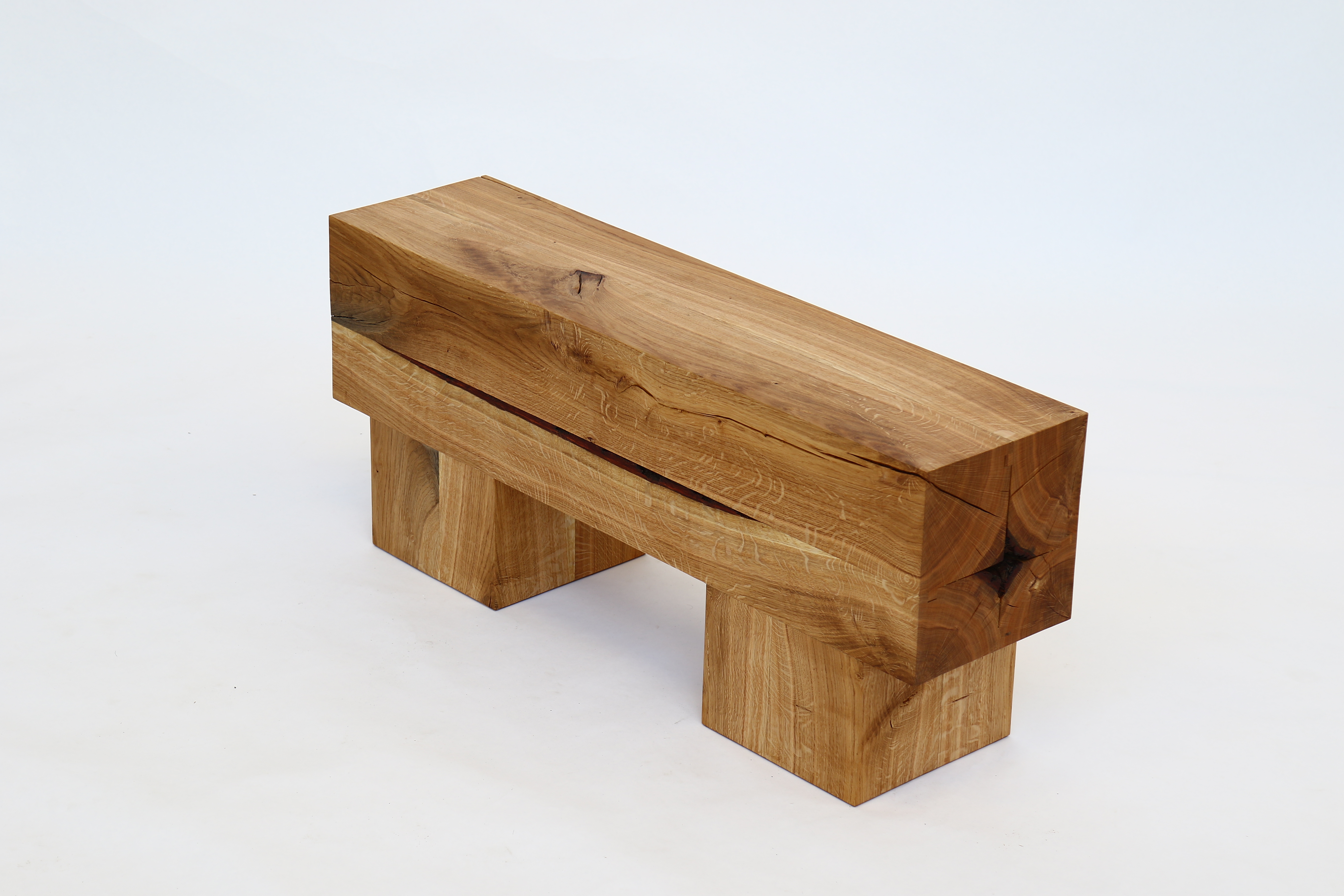 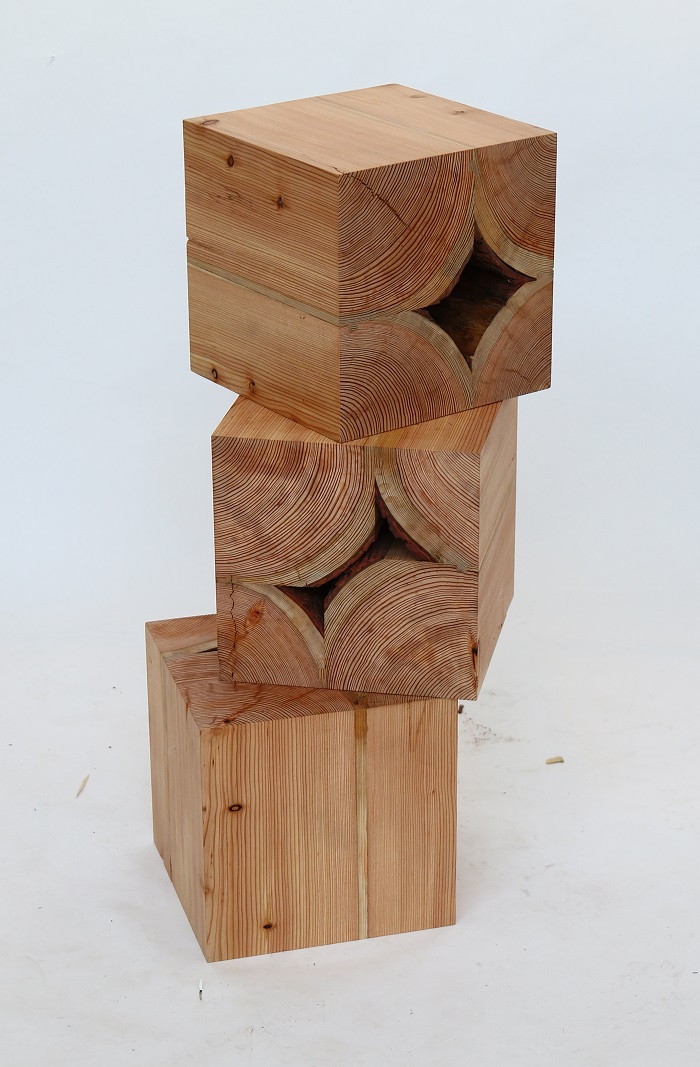 Doing and making things ourselves is also something we often burn our fingers on. Yet we continue doing it because what is normally for sale is hardly ever in line with what we make. This time it was a switch for the new small ceramic lamps. First, we made a metal casing for a switch. This was only just finished when I realised that the switch, including transformer, could also be mounted in a ceramic casing. The great thing about ceramic is that the shape can be quite complicated, as long as it can be removed from the mould. So we made a ceramic casing to fit exactly around the mechanism we needed. We made a large number of models for the small ceramic lamp. 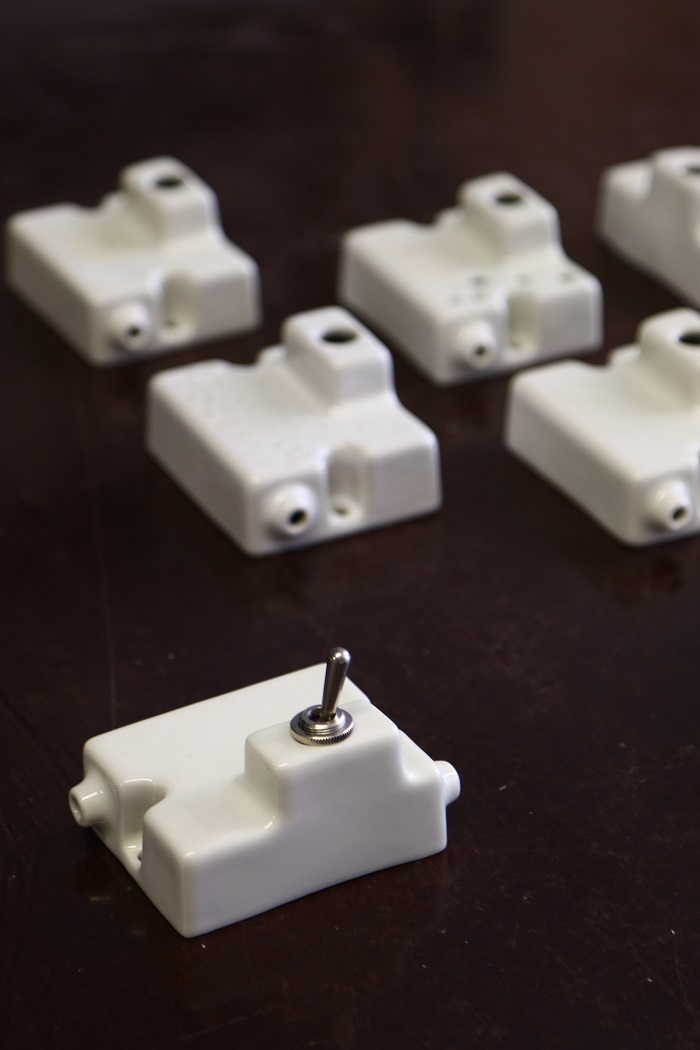 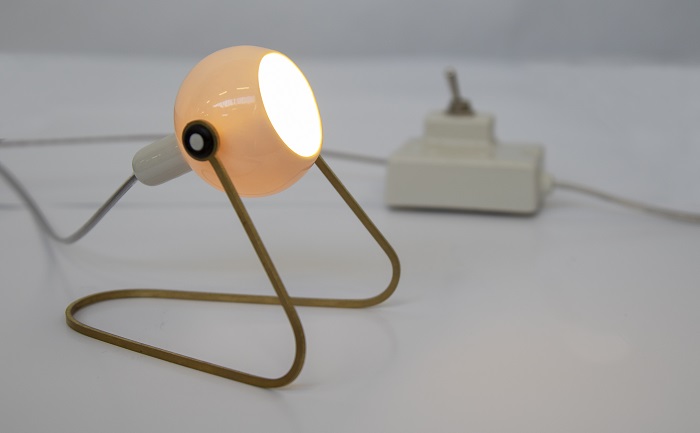 We will also be presenting a series of glass ‘standingagainsteachothervases’ that were blown just the day before yesterday at Royal Leerdam Crystal. The idea elaborates (how could it be otherwise) on the beam vases we presented last year. The starting point for the beam vases was that they were limited to a certain number of moulds, each of which could be used to blow five vases. Now we make as many vases as possible using the same mould. We also used the same mould to make corner, side and middle vases, which can thus be arranged on the table in all kinds of different ways. It was the intention that they would be easy to make and therefore affordable, but creating these vases also turned out to be precision work. Yet we wanted to present them because the first experiments are really beautiful. 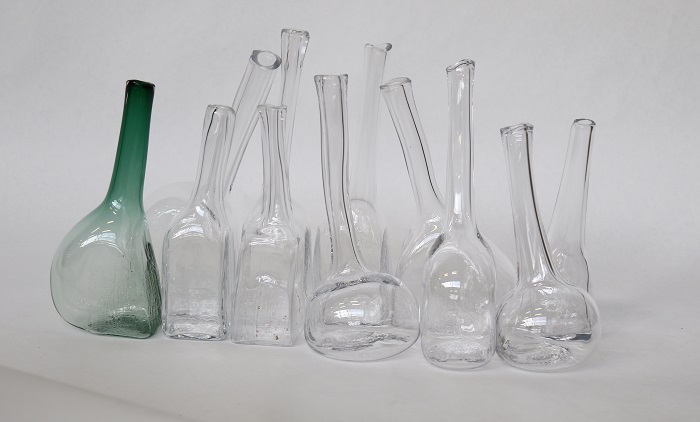 It is no coincidence that we are stacking coffee table blocks using the insides of the enormous beams left over from the production of the enormous beam cabinets. The wood had been saved and was waiting to be sawn. We also had an assignment to make coffee table blocks to go with army fabric beam benches. These had to be delivered before the summer holiday. To everyone’s great frustration, this did not work out, and when we were nearly ready to deliver them, it turned out that the benches had been made with the same (seat) height as the ones we had made for Air Republic, Sergio Herman’s restaurant in Cadzand. This was just one of the disappointments of the week, but you can’t make an omelette without breaking eggs. The benches are now standing in the Wonder Room and in the future they will have a place in the hotel we are making, and the coffee tables have become more beautiful than ever, because everything that has gone wrong can be seen during the DDW.

In addition to all the above-mentioned products we also made a customized aluminum table tennnis table and a coffee table from the sawing loss of the enormous beams cabinets we made previously. 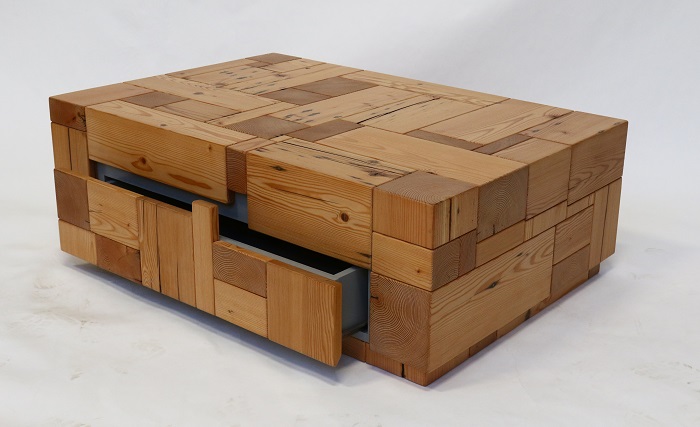 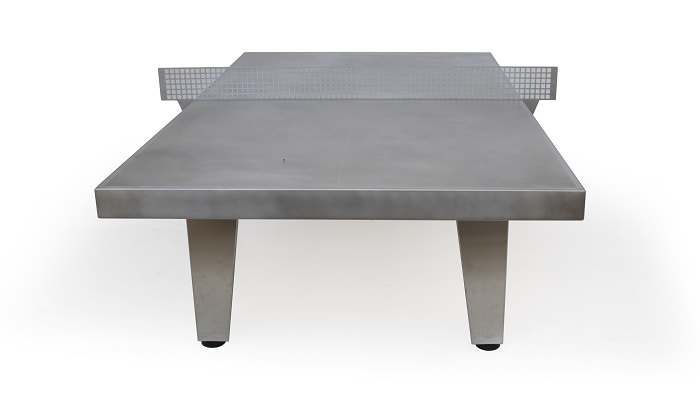 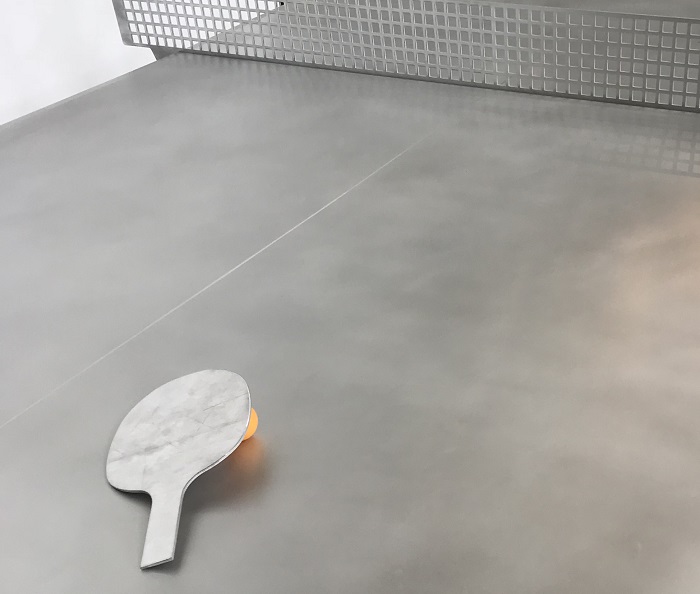 As always, it is a madhouse here before and during the DDW. Loads of designers and small companies will be presenting their designs and products, DDW Music will be visiting us for two days again and last, but certainly not least, we will be organising two evening dinners together with Sergio Herman. These dinners promise to be true happenings: a table for 180 people, food cooked by Sergio, served on plates we still have to make. Our head chef Martien has just done a taste test with chocolate and copper and has also checked whether it can be washed up properly. The test went well and also helped us to solve the problem of the wobbling plate. We will be making most of the plates, except one which is provided by Floris Wubben. Floris will be in our workshop during the DDW with his clay press machines and his work. This year for the first time it is a real ‘workshop presentation’ with machines and a designer producing on the spot.

In short: with united forces we are preparing ourselves for the DDW, to welcome everyone and make a great week of it. The DDW is so massive that you are always unsure whether you will be celebrating when it’s all over or licking your wounds. But if you enjoy tension, you’re in for a good time!

Please click the following link for the DDW 2018 close up.

Reserve your tickets for the Sergio Herman x PHE dinner in our workshop (Friday has already been sold out!!!)