The most important development of last year was perhaps the flying start we made with the recently established architectural firm ‘Eek en Dekkers’. Years ago, when Iggie Dekkers started working with us, we had just one project, and now we have more work than we could have imagined. That one project, the RAG building, was completed last year. We were able to purchase and develop the third and last industrial building available at Strijp-R. We did this with construction company Van Gerven and with the support of Amvest.
We treated the entire process, from initial idea to completion, as a shared responsibility. This sounds logical, and it is, at least for us, as we are completely accustomed to managing the process from idea all the way to the consumer. But now that The RAG is complete, we are more aware than ever that the traditional construction world is perhaps the best example of inefficiency through excessive organisation. This is often caused by the uncertainty that the complex construction process entails. If a problem or mistake arises, a specialist is introduced into the process to ensure things go better the next time, or the process is divided up.
But the mistakes actually arise because there are too many links and no generalists to manage the whole process. The specialist can certainly understand his work and be useful, but due to his partial responsibility, another point of potential error is added to the total process. Construction is characterised by a multitude of errors and ironically enough, all attempts to minimise these errors result in more of them instead of less. Fear is an important advisor in life and perhaps more than average in the world of construction. After all, it involves complex processes in which fear of the unknown seems unbearable (For those who like the sound of this – or have their doubts about it – and enjoy reading, I recommend the book ‘Antifragiel’ by Nassim Taleb. After reading this book, this paragraph will hopefully seem a little less opinionated).
Anyway, we do things our way, and have already completed a building. The renovation of the RF building, which we raced through in terms of process, began early this year. Click the following link for more information about the RF-building and other previous building projects.
I recently came to the realisation, primarily from the mills in France, that the core of my love for ruins comes from the fact that a ruin holds both the past and the future. You can fantasise about what it used to be like and what it could potentially become. To be new is not a goal in itself, but rather the result of a process whereby the best possible result is achieved, in the most pragmatic way and with respect for what is and what the possibilities are. In this sense I feel like a window in time between the past and the present. In addition, we trust that what is logical and almost normal, is often also beautiful and that which requires great effort is unlikely to be beautiful and is usually also expensive. If everyone tries to create something special, and ‘new’ seems to be the highest possible achievement, then making something normal suddenly becomes special.
This normal approach has yielded a lot of projects in a short time 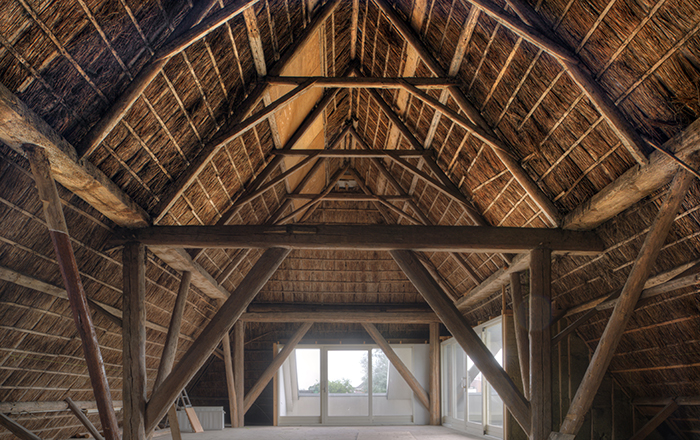 In Woudsend (Friesland) we are rebuilding a farm on the Iewal into an exuberant meeting place where the cows and agricultural projects in the region play the leading roles. The client wants only one thing: to convey his love of local food and as he is Friesian, it is all about Friesian food. There had been a previous attempt to renovate the farm. Everything that had been added was shockingly ugly and completely lacking in respect for the beautiful architecture. The 9 metre high wooden roof, with original beam construction, is particularly impressive. Instead of removing all the ugly new additions and renovating the farm in authentic style, we chose to leave the steel construction as it was and adapt it. In the middle of the first floor is an enormous atrium, which means that the roof can be experienced from all four corners of the building. The steel construction itself will be given a smooth finish, whereby old is old and new is new. The new additions ensure that the old is shown at its very best. The result could have been the same if we had wanted to realise a good plan in an empty farm building. The renovation of the farm is currently underway.

In Deventer we are able to give shape to our client’s ambition to mean something to the city. The listed building ‘De Drie haringen’ is being renovated into a collective office complex for start-ups, who can work there for free for several years. They will even be given starting capital and guidance from a team of experts. A bakery will be established on the ground floor, which will function as a meeting place for both the tenants and passers by. The six-floor tall building (including two lofts) will house an atrium that vertically divides the construction, whereby its original function – a warehouse for herrings – remains visible to everyone with the wheel and cables in the roof and a large loading door on each floor. The atrium ensures that the companies are visible and that everyone can be in contact with each other. So it is not an anonymous office building, but rather a lively hub where work is simply a part of life. 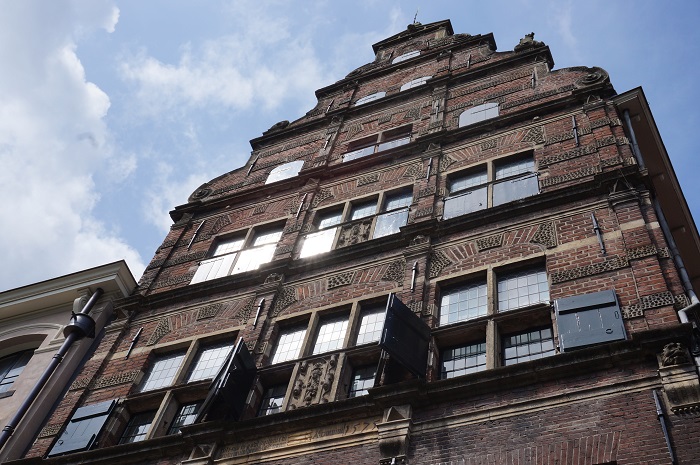 We are also working on several other projects. The Goudsesingel building (industrial premises) in Rotterdam will become a collective office complex again, developed in a continual process. We are also working on a new luxury neighbourhood as an extension of a VINEX location in Berkel and Rodenrijs. Another project is the ‘eco-lodges’ in the Biesbosch. If successful, these will be holiday cottages made from blocks of waste paper. We call them ‘waste paper building block houses’, but this is perhaps incomprehensible, although completely correct. Finally, we are working on the design of a watchman’s house in Uitgeest. We have a special wooden construction in mind for this, hopefully with excellent results.
I have probably forgotten to mention a project, but the very biggest project we are currently working on is the TD building in Eindhoven. Several weeks ago we received half of the best possible news we could get, namely that the plan we submitted together with Amvest is now one of the last two. The city council will make a decision in March as to with which party they wish to continue. We are currently unable to release the plans, although we will be presenting them to local residents and stakeholders. Our plans will then reach a wider audience. But to end with which we began; we are going to do what’s normal, namely: to build and have built what people want instead of defining too much in advance. The more you determine in advance, the greater the (statistical) chance that you will build more of what people do not want. Just as an old centre or neighbourhood in a city would have once developed by way of individual initiatives, the TD building with its three wings and the surrounding area will undergo a normal development that, despite it being normal, has never taken place this way. It makes sense not to throw away, but to utilise the existing possibilities and to build exactly where people want to live and work. And even to actively involve the future residents and users or let them do their own thing.